On Thursday, 21st February, the President, Nana Addo Dankwa Akufo-Addo, delivered a very comprehensive State of the Nation Address (SONA) to Parliament. The address touched on nearly all aspects of life in Ghana including very important issues of concern to the working people of Ghana. We would like to congratulate the President on a very successful SONA. We would also like to congratulate the President and all the Chiefs and people of Dagbon on the successful resolution to the protracted conflict in the area.

We have taken note of all the important issues the President raised in the address including some achievements in macroeconomic management such as the GDP growth of 6 percent for 2018, and the forecast growth of more than 7 percent for 2019, as well as the decline in inflation. Other notable macroeconomic achievements the President mentioned are the decreasing fiscal deficits, the falling debt-to-GDP ratio, the declining trend of the Bank of Ghana policy rate, as well as the trade surplus Ghana has achieved for the first time in more than a decade.

We also recognize the significant expansion of the public sector workforce during the last two years, under President Akufo-Addo. The Nation Builders Corps programme is an initiative TUC fully supports. This programme alone has provided job opportunities for about 100,000 young graduates. The President also mentioned the recruitment of a large number of health personnel and the plan to recruit even more health workers in 2019. We support the expansion of the public sector workforce because, first, decent jobs are being created and, second, it is improving public service delivery especially in the two key social sectors of health and education which are crucial for the wellbeing of citizens and for human development, generally. An important feature of the President’s address was his recognition of the numerous challenges that confront the nation in several sectors, despite the successes he so eloquently enumerated. The national housing situation remains a great challenge. Linked to this is the worsening sanitation situation, especially in our cities. Health and education infrastructures have seen some improvement in recent years but they remain inadequate and the existing ones are overstretched.

Despite all the achievements in macroeconomic management, the President was also mindful of the need for caution because, as he rightly observed, this is not the first time we have had such a good set of figures. We agree with the President in his call for prudence and discipline in the way the affairs of the state are conducted.

One of the key challenges that remains to be addressed is how to maintain the linkage between the macroeconomic achievements and daily living experiences of Ghanaians. We must work together, as social partners, to ensure that economic growth creates more decent jobs that enable workers to own decent housing and other basic necessities of life. While we are commending government for creating more jobs in the public sector, we recognize that there is a limit to the capacity of the state to directly address the job crisis. The private sector must be supported to lead the job creation agenda. Declining inflation must be felt in the markets for goods and services and it must reflect in the cost of living and living standards of the people of Ghana.  A trade surplus must reflect in the exchange rate of the national currency against the major currencies of the world. The Planting for Food and Jobs must sustain food security all-year round and, even more importantly, it must show real improvements in the incomes and living standards of farmers.

Achievements in macroeconomic management that are delinked from the daily lives of citizens and communities is likely to be ephemeral, as our experience has shown in the last few years. Macroeconomic stability cannot be appreciated in a highly partisan and polarized environment like ours, unless and until we find ways to ensure that macroeconomic gains continuously lead to noticeable improvements in peoples’ lives. This requires a national conversation that is broad-based and takes into account differences in perspectives in the formulation, implementation, evaluation and review of economic and other public policies.

The President also recognized some key sectors of the economy that need further attention including the banking sector, the energy sector and the ports. We have followed the recent reforms in the banking and energy sectors with keen interest because of the effects such reforms can have on the economy and jobs.

The ports need special attention. We would like to use this opportunity to draw the attention of the President to very important issues relating to the building of a new Container Terminal by the Meridian Port Services (MPS). Our understanding is that Ghana Government signed a 35-year contract with MPS in 2015 which allows MPS to effectively monopolize the activities at the Tema Port.

We have information that the contract was awarded to MPS without going through a competitive bidding process. The information we have gathered further indicates that when the new terminal commences operations in June, 2019 with the monopolistic rights of MPS, Ghana Ports and Harbours Authority (GPHA) and other operators in the Tema Port such as terminal operators, Inland Container Depots (ICDs), Stevedoring companies and shore handling companies would lose huge revenues that may lead to the collapse of many container-related businesses. This would translate into massive job losses in the maritime industry which is already grappling with redundancies as a result of government’s policy of registering many Stevedore and shore handling companies.

There are indications that GPHA alone may sack about 1,400 workers in 2019, as a result of the MPS monopoly at the Tema Port. If the contract is not reviewed and MPS commences operation in the new terminal in June, 2019 government/GPHA will surely lose millions of US dollars in revenue, in addition to over US$800 million granted to MPS in tax concessions. We are, therefore, not only concerned about the massive job losses that would result from the operations of the new Container Terminal by MPS but also the huge losses in government revenue.

We would like to humbly appeal to H.E. President Nana Addo Dankwa Akufo-Addo to intervene, as a matter of urgency, to ensure that the contract between Ghana Government and Meridian Port Services is reviewed.

The TUC and its affiliate unions will continue to support all government policies and programmes that strengthen the national economy, create decent jobs and bring tangible improvements in the lives of Ghanaians. 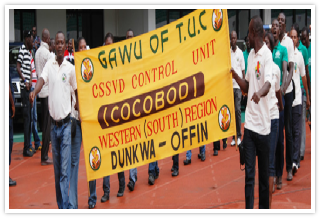