Two other objectives of the meeting were to empower domestic workers on organizing and forming a trade union as well as develop future activities. The activities were said to include Strategies for domestic workers to get recognition through self-organization, look at experiences of their employers and existing Policies and Laws in Ghana.

The programme which took place at the National Labour College in Accra was put together by the Organization Department of the TUC and coordinated by the Domestic Workers Focal Person, Cynthia Ananoo. It brought together thirty participants, twenty Seven of whom were domestic workers with various levels of experiences.

Welcoming them, the Head of  TUC’s Organization Dept., Tobge Adom  Drayi II explained that the workshop besides sensitizing Domestic Workers on the ILO Convention 189 and Recommendation 201 was to have them come together to form a union. That, he was sure would give them the desired recognition.

He further explained that TUC Ghana which represents all workers including domestic workers exists to strengthen the efforts of its affiliate Unions in the field of organization, education and support their struggles to improve working and living conditions.

Participants shared obvious challenges some of which included working more hours without overtime or payment for health care, rest days or fixed working hours and receiving the same salaries for years without enjoying any increments.

Concerning that point, one participant opined that “I have worked for my employer for 22years but have been receiving Ghc150.00 for so long without increment. I stay in the house and eat breakfast every day.”

It was however observed from the discussions that their conditions differ, while some enjoy a day or two rests, others are not entitled to anything. There were yet others whose health insurance are paid by their employers and taken care of when ill. There are also situations where the worker stays in the house of the employer while others just come in as and when, to do gardening, washing or cooking.

The meeting agreed that for the domestic workers to be able to access their rights and be protected by the law, they must organize themselves into a union. The peculiarity for some though, was that any attempt to join or form a union will see them getting the sack; nevertheless they were willing to persist.

At her turn, Celestina Tetteth from the Ghana Labour Office congratulated Domestic Workers (DW) as special workers in relation to how the whole world body of ILO Conference in June demonstrated support for Convention 189 on Decent on Work for Domestic Workers.

This Convention, she said, has tasked all governments to come out with laws to protect DW. “Even though one can say that the Ghana Labour Act 651 of 2003 protects workers in the informal sector and gives some protection to Domestic Workers as well; the Act in terms of the definition of Domestic workers, is not adequate.”

The need for the formation of a National Policy on Decent Work Task force which includes Domestic Workers, Employer Associations, and Trade Unions by Ministry of Employment and Social Welfare therefore became paramount. The task force was tasked to come out with policy guidelines to be formulated into law and is currently under pressure from parliament to expedite action on the work to facilitate parliamentary approval for the ratification of ILO Convention 189 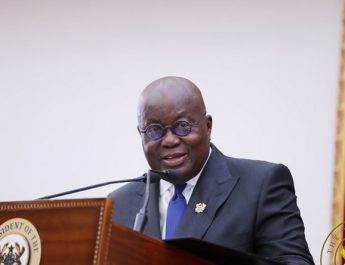 PRESS RELEASE ON THE 2020 STATE OF THE NATION ADDRESS

PRESS RELEASE ON THE STATE OF THE GHANAIAN ECONOMY

READ BY DR. YAW BAAH, SECRETARY-GENERAL OF TUC On behalf of Organized Labour, I would like to welcome our friends from the media to

The Trade Union Congress, Ghana on Thursday presented COVID-19 Personal Protective Equipment (PPE) to the Union of Informal Workers Association (UNIWA) to support its members and associates in the fight against the virus.

Comments Off on The Trade Union Congress, Ghana on Thursday presented COVID-19 Personal Protective Equipment (PPE) to the Union of Informal Workers Association (UNIWA) to support its members and associates in the fight against the virus.

Bad Behavior has blocked 1165 access attempts in the last 7 days.