On Wednesday, 3rd April, 2019, the Economic Management Team (EMT), led by H.E. The Vice President of the Republic of Ghana, Dr. Mahamudu Bawumia, made a presentation on the state of the Ghanaian economy in a Town Hall meeting with a cross section of the public.

First of all, we would like to commend the EMT for the bold decision to subject itself to public scrutiny. The forum provided a platform for   the EMT to explain various government policies and the rationale for some of the critical decisions government has made in the last two years. The forum also afforded the public a unique opportunity to question some of the policies and to make suggestions. The debate the Town Hall meeting has generated would, hopefully, enrich the conduct of economic and social policy.  It is a worthwhile exercise that must be institutionalized and sustained.

Second, we commend government for the remarkable achievements in economic management, as evidenced by the figures presented by the Vice President. We recognise the steady growth of the economy, especially growth in agriculture and industry. The steady decline in inflation, interest rates, and the fiscal deficit are quite remarkable. We have also noted the improvement in our trade balance and our gross international reserves.

The question on the mind of every Ghanaian is: What do these statistics mean for lives of Ghanaians and how can these achievements be sustained?

As H.E. President Akufo-Addo noted in his 2019 State of the Nation Address (SONA), “this is not the first time we have had such a good set of figures”. For many Ghanaians, because we have seen similar impressive statistical indicators before, with no corresponding visible improvements in our lives, we are quite skeptical about the so-called “macroeconomic stability”.

The TUC shares these concerns not because we do not appreciate the importance of macroeconomic stability. GDP growth is important. There is no doubt about that. But GDP growth per se does not guarantee that a bigger economic pie will benefit everyone. We need policies that will   move us beyond perpetual stabilization and help link the stability we celebrate with the daily experiences of Ghanaians. The GDP growth must mean something for the creation of decent jobs, decent housing, improved nutrition, better healthcare, improved quality of education, and improved sanitation facilities. The declining inflation must be felt when we buy a bag of rice, a pack of sachet water or when pay our rents. The trade surplus must mean something for the stability of the value of the Ghana Cedi. Economic growth must translate into improved living standards for all Ghanaians.

As Thomas Sankara once said, “It is simply a matter of choosing between Champagne for some selected few ones and potable water for everyone”. We expect government to implement social policies that ensure that there is “potable water for everyone” in Ghana irrespective of their location.  That is why we are happy about government’s plan to pursue an “inclusive transformation to help the poor and vulnerable in our society and ensure social equity”.

We would like to reiterate TUC’s support for all the socially-inclusive programmes that are being implemented by government including the Free SHS, the Nation Builders Corps (NABCO), restoration of nursing training and teacher training allowances, expansion of the School Feeding Programme, reduction in electricity tariffs, the Zongo Development Fund, construction of community-based water systems, construction of dams in the five northern regions, rural markets, clinics, warehouses, supply of hospital beds, and procurement of ambulances for each of the 275 constituencies, among others. These are the programmes that should occupy the attention of government because they bring real improvement in the lives of Ghanaians.

Dr. Bawumia announced the end of the IMF Extended Credit Facility programme. The TUC and its affiliates are very excited about that because it leads us to another phase of development which emphasizes President Akufo-Addo’s vision of Ghana Beyond Aid. For this to happen we must get over the neoliberal myth that economic growth, as    measured by increases in GDP, automatically creates jobs and improves livelihoods. It is not always the case that when GDP grows, it means we are creating jobs.  This is a fallacy. We have witnessed “jobless growth” in Ghana for more than three decades. Since 1984, Ghana’s economy has consistently expanded annually but joblessness has also grown during the same period.

The TUC has already commended government for the significant expansion of employment in the public sector. As the EMT explained, Government has added 350,000 workers to the public sector workforce. We support the expansion of the public sector workforce because decent jobs are being created and it is improving public service delivery especially in the two key social sectors of health and education, which are crucial for the wellbeing of citizens and for human development. But we fully acknowledge the limit of the public sector’s capacity to absorb the large number of young people eagerly looking for employment. The ultimate solution to the jobs crisis lies with the private sector. And that is also the reason why TUC has supported the “One District One Factory” among other initiatives.

We are aware of the multiple challenges facing the domestic private sector. We are also aware of the numerous interventions government has initiated to support the sector. But the challenges facing the sector keep growing. It is important that government intensifies its engagement with the private sector to ensure that the numerous interventions address the real issues.

One of the flagship policies announced by Vice President Bawumia at the Town Hall meeting has to do with port reforms. The new measures are quite radical and rightly so given the existence of what Dr. Bawumia called “archaic practice” at our ports.

The reasons cited to justify these measures are quite clear but the expected benefits from the measures are not clear. He announced that government will have to make “necessary fiscal adjustments” in the short term “to accommodate any temporary revenue shortfall…”. What it means is that the reduction in import duties will benefit some individuals in the short term at the expense of the public purse. A more detailed cost-benefit analysis of these measures, in terms of revenue loss and revenue gains, would have been more useful. We hold the view that the new measures are a clear manifestation of the influence of the powerful import lobby on policies and politics in Ghana. We all know that a major challenge facing the domestic private sector is unfair competition from imports including sub-standard counterfeit products. The new measures announced by Vice President will further flood our markets with imports. This has implications for domestic production, jobs and the stability of the Ghana Cedi. Reforms of the import tariff regime should be geared towards reducing tariffs for imported intermediate inputs or for products we currently do not have the capacity to produce, but not for all kinds of imports that only come to outcompete local producers.

We believe that the establishment of the Fiscal Stability Council and Financial Stability Council will improve the quality of economic management and help move our country forward. We are expecting to see the establishment of the Social Partnership Council which will bring together Government, Business and Organised Labour. We would like to assure government once again that the TUC is willing and ready to work with our social partners towards social and economic development that benefits all Ghanaians.

Debt and COVID: the recovery must not come at the expense of workers and public services.

Comments Off on Debt and COVID: the recovery must not come at the expense of workers and public services. 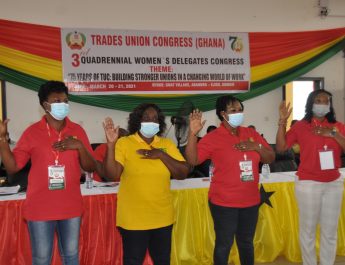