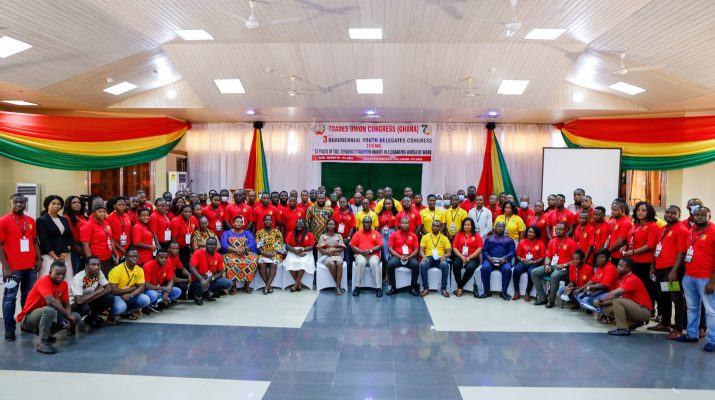 Newly Elected Officers of the National Youth Council of the Trades Union Congress of Ghana during the 3rd Quadrennial Youth Delegates Congress at the PSUC, Adiembra-Kumasi on 21st March 2021.

The Trades Union Congress has held its 3 rd Youth Quadrennial Delegates Congress at the Public Services Union Centre at Adiembra – Kumasi. The Congress which took place from 20th – 21st March 2021 was attended by young workers from all affiliate national unions of the TUC, representatives of International partner unions, and employer associations among others. The theme for the Congress, “75 years of TUC: Building Stronger Unions in a challenging world of work” is apt as it captures the harsh reality of workers in these tough COVID times. Even in these bad times, this year is special being the 75th Anniversary of the TUC. The newly elected executives would steer affairs of the National Youth Council for the next quadrennial 2021-2024. The Conference also reviewed its policies and resolutions, as well as its Constitution to guide the Council’s affairs.
The National Officers elected were:
Dennis Atuwo – Chairperson – Health Services Workers’ Union (HSWU)
Ebenezer Acheampong – Vice-Chairperson – Public Services Workers Union (PSWU)
Adiza Lamptey – Vice-Chairperson – General Transport, Petroleum and Chemical Workers Union (GTPCWU)
Abena Afriyie – Secretary – Trades Union Congress (TUC – Ghana)
Joshua Abakah – Assistant Secretary – Construction and Building Materials Workers Union (CBMWU)
Angela Medadues Badohu – Organizer – Public Utility Workers Union (PUWU)

The Secretary-General of TUC, Dr. Yaw Baah, swore in the Officers and congratulated them. He added that being in their offices presents a difficult task and requires working effectively and efficiently for the progress of the Youth Council. The newly elected chairman in his acceptance speech expressed appreciation to Delegates for electing them through a peaceful election, adding that they would continue from where the past executives left off, in order to help the Youth Council achieve its aims and objectives.  Background The Trades Union Congress (Ghana) is the largest trade union organization in the country, organizing workers in both the public and private sectors. Being the main umbrella organization for trade union activities, the TUC secures socio-political and economic justice in Ghana and ensures that workers benefit from its collective action. 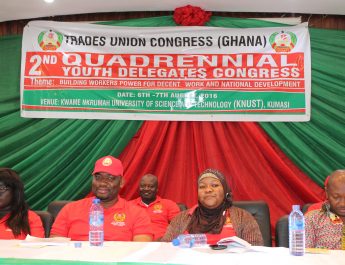 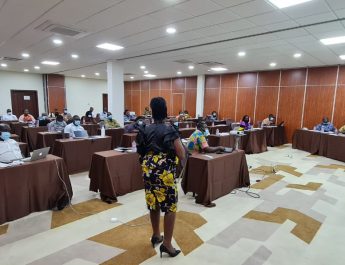 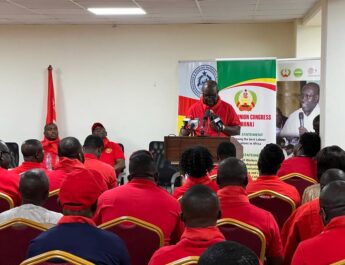